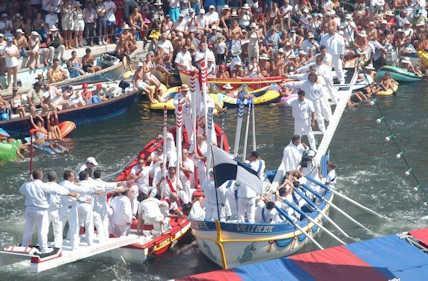 The Sete Water Jousting festival in France, originated many centuries ago. This sport dates back in France to the 12th Century (and possibly even to Roman times) and is now a passionate fixture of Languedoc traditional culture. We came across it by chance one Sunday afternoon as we drove into Sete for a drink. On the main Royal Canal we saw a huge crowd on each bank of the canal and spilling over from the different bars and restaurants. Then we saw what can only be described as 20 blokes dressed in cricket whites in two boats doing the craziest of things.

This spectacle is something that really has to be witnessed to be believed and it is difficult to describe the spectacle adequately, but here goes: Water jousting consists of two huge rowing boats with a raised ladder at one end. On the ladder sit 4 jousters dressed all in white. In the boats, there are 10 rowers who then propell the boats towards each other. As the boats get close, one of the jouster's picks up their shield and jousting pole and tries to dislodge the other boat's jouster from their platform. A great applause greets a jouster falling into the canal. The boats past each other 7 times and the winning crew is the one who unseats most opponents. As I said, this really is one of the most unusual water sports in the world.

Oh, sorry, I forgot a detail. In the boats alongside the rowers, there is an on-board band of pipers, oboist and drummers, who knock out a beat for the rowers to follow. In addition to this, a brass band sitting in the stands alongside the canal, gets the fans going and salutes the victorious team. It has to be said that the band seems to be fuelled mainly by Pastis and as the day passess they get more and more lively. 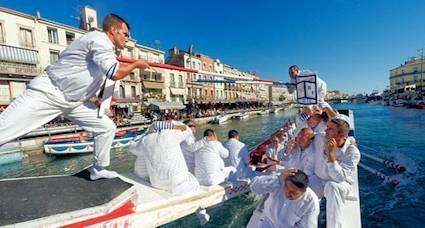 Water jousting has to be one of the most unusual sports from around the world. Apparently, Water Jousting was recorded as being held in Sete during the inauguration ceremony of the city's port in 1666. Since then, it has become a key staple of life within Sete. Each area of Sete has its own Societe des Jouste and rivalry is fierce. Teams from other Languedoc ports (Meze, Marseillan, Agde) also compete in the water jousting tournament.

Water Jousting is a recognised sport in France (and in Switzerland, along with Yodle-ing!). Along with the white outfits, the participants wear either red or blue ribbons - blue for bachelors and red for the married. There are even different categories of Jousts. The junior competition is for those under 21 and the heavyweight class is for anybody over 88 kilograms in weight (and it has to be said that when we watched, there were quite a few heavyweight contestants). The heavyweight title is considered the blue ribbon event, with the winners getting their names engraved on a shield that is displayed in the Paul Vallery Art Museum in Sete. 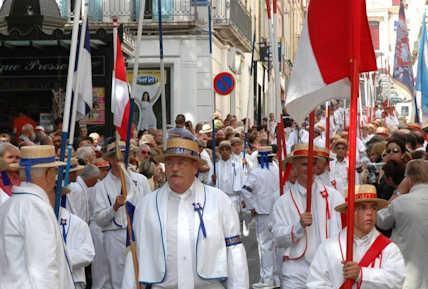 The Saint Louis Sete Festival celebrates the patron saint of Sete. It is also the key date in the water jousting calendar in Languedoc. It is the final water jousting tournament in the year, usually held from the middle to the end of August. The whole of Sete comes alive during 6 days of festivities, with fireworks, carnival processions and the bars and restaurants stay open late into the night. The main event is held on the Monday, the traditional day of Saint Louis. The event is marketed as the "Water Jousting World Championship", in a similar vein to the USA Baseball World Championships (involving all of . . . errm . . . 3 countries!!).

This year the Saint Louis Festival date runs from Thursday 17 to Tuesday 22 August 2017. If you are looking for things to do in France during your vacation, I would highly recommend that you make a detour to Sete to witness the events unfold. You are advised to get there early to get a seat on the grandstands either side of the canal, or to reserve a table outside one of the restaurants.

If you are thinking of visiting the South of France this summer and you want to stay in Sete, then we have a good range of rental properties on Go Languedoc to suit all tastes and budgets. Here is just a sample of the accommodation in Sete France available to rent now:

Visit accommodation Sete France for the full range of rental properties in Sete on Go Languedoc.