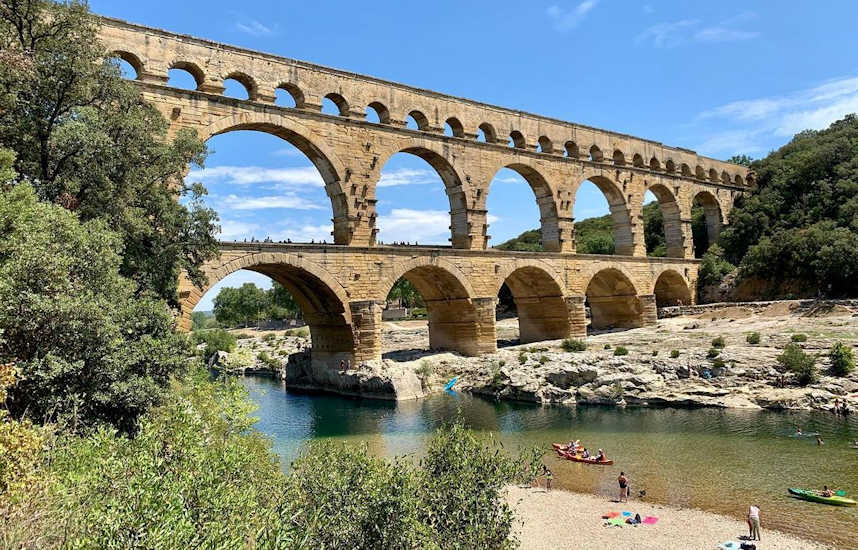 On the left bank of the river the impressive Pont du Gard Visitors' Centre offers many interesting activities to discover this outstanding monument. There is a comprehensive museum on the history of the Pont du Gard and archeological artefacts of the Roman era. There is also a very good film on the Pont du Gard. The centre is fully multi-lingual.

When the Romans needed to supply the growing settlement of Nimes with water, the nearest suitable source was over 50km away near Uzes on the River Eure. With typical Roman single-mindedness they ploughed on with the project despite the fact that along the route they would need the water to cross the deep gorge of the River Gardon. It remains one of the most impressive engineering feats of the ancient world - the waterway descends only 17m along its 50km course, with the Pont du Gard aqueduct solving a complex technical problem. The best way to appreciate this engineering wonder is to climb up to the look-out areas on either side of the Gorge.

The work on the Pont du Gard started in AD38 and was completed in AD 52. A thousand men worked on the site, using more than 50,000 tonnes of stone. The aqueduct delivered 35,000 cubic metres of pure water per day to the baths and fountains of Nimes. The average slope of the channel is 24 centimetres per kilometre and the Roman Engineers used the natural slope of the land to convey the natural spring water.The water crosses the river at a height of 48 metres. The aqueduct functioned effectively until the third century. Partially demolished in the fourth century, the aqueduct was finally abandoned early in the sixth century. Pillaged for stone through the ages, the Pont du Gard was first used as a bridge in 1295. An earthquake in 1448 caused significant damage to Pont du Gard. Comprehensive restoration work took place in the eighteenth century, under orders from Napoleon. 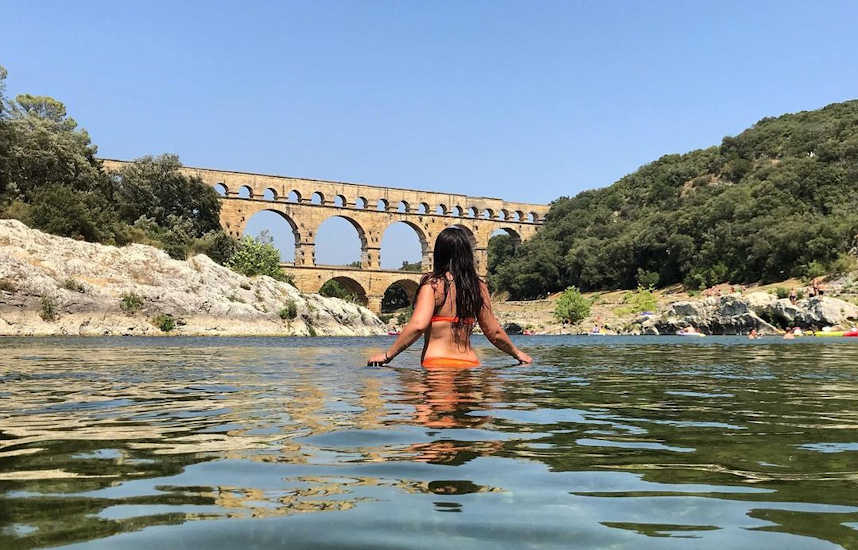 Our children enjoyed the botanical trail in the countryside around the Pont du Gard. This was also a great spot for a picnic, where we could find some welcome shade from the sun. After lunch we moved down to the river and kids loved swimming and searching the rock pools for fish. It is a very special spot here. Just to look up at the Pont du Gard and imagine how on earth they managed to move all the stone and lift it up to the height that they did (even during Napoleon's time of reconstruction). Apart from being a wonderful picnic spot (I reckon one of the best in Languedoc, see Picnic spots in Languedoc), the botanical trail at the Pont du Gard certainly kept our kids amused for a good couple of hours. It is a beautiful walk with good information. It is also free! This 1.4km signposted path winds its way through the history of the Mediterranean countryside, with its vines, olive trees and oak trees bordered by drystone walls.

In the Pont du Gard visitors' centre there is also an interactive childrens area ('Ludo'). We didn't go in as it was full (and you have to pay about ‚¬5) but the children looked to be having a rare old time with all the interactive objects. The walk to the Pont du Gard is worth the drive here in itself. Beside the path there is a famous Olive tree. We couldn't quite work out why it was so famous, but there is an inscription beside it and I am sure it would tell you in the guide book (if you want to shell out 4 euros).

All in all, I have to say that the best thing the kids did that week was swim in the river under the Pont du Gard (just make sure to bring some plastic shoes for the kids to protect their feet from the gravel river bed). If this was a monument back in England they would fence the damn thing off and not let anyone near it. But here in France you can really enjoy their monuments. The whole place is car free so it is great for your kids to run around and burn off some energy. If you are looking for more ideas to entertain your children in Languedoc, read our article 10 adventures for kids in Languedoc. The Pont du Gard is also close enough to Nimes that you can nip in later on in the day for a bite to eat and a wonder around the Amphitheatre and the old streets of Nimes.

Getting to the Pont du Gard

It is well worth arriving here early to get a car park space. It is very popular in the summer. We parked on the visitor centre side of the river. The cafe, which was spotlessly clean, did a very good ham and cheese panini and was not too expensive. The parking was about 5 euros. The museum entrance is around Euros 6 and the film show is another Euros 2-3. The botanical trail is free, as is the access to the Pont du Gard itself. You can get a guided tour of the Pont du Gard and the remains. I think that this was only about Euros 5 and if you prefer to take in your history this way, you may get more out of the tour than the guide book.
The museum is open all year around (9.30 to 17.30 (19.00 in summer). It is closed Monday mornings. Throughout the year it has a full schedule of exhibitions, concerts, heritage days and nature outings. 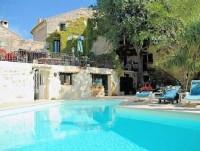 If you would like to stay close to the Pont du Gard and Nimes, Go Languedoc has a number of houses in the area to rent for vacations and long term lets (see Nimes houses). In particular, the ancient town of Uzes, which is just 15 kms from the Pont du Gard, is always a popular holiday destination with our customers. There is a large market held every Saturday, which takes over the whole town. Uzes also has plenty of good restaurants and some great little boutique shops tucked down the ancient alleyways.

Read about the Roman city of Arles, South France once the home of the artists Van Gogh and Gauguin