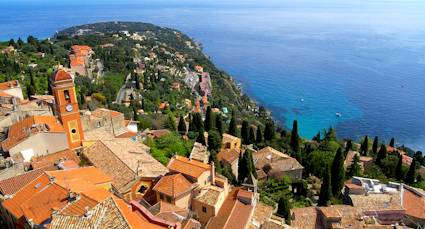 Roquebrune-Cap-Martin is a popular French Riviera vacations resort located between Monaco and Menton. Roquebrune, France, is a medieval village perched on rocky cliffs high above the Mediterranean. Its location provides some amazing views over the coastline. In the heart of the old town, there is a Medieval castle and an impressive 12th century church and its picturesque narrow stepped-streets are great to stroll around. There are also lovely little squares and fountains and charming buildings with wrought-iron balconies.

Roquebrun Cap Martin is also famous for hosting the Monte-Carlo Tennis Masters at the the Monte Carlo Country Club is located on the outskirts of the village.

The main square of Roquebrune is tucked in between the chateau and the cliffs and provides great views. In the evening this is a great place for people-watching whilst you wait for the sun setting over nearby Monaco.

Roquebrune-Cap-Martin has been one of the most sought-after locations on the French Riviera, by both artists and the aristocracy. The 'Belle Epoque' era, or golden age of Europe (from 1871 to World War 1) witnessed significant development of the French Riviera coast. The peace and prosperity in Paris spilled over into the South of France, as many artists and wealthy citizens discovered the French Riviera and took winter vacations in newly built hotels and villas. 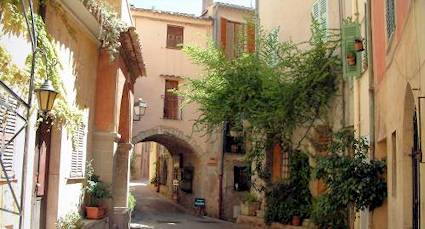 Originally, Roquebrune was controlled by the Grimaldi family of Monaco for five centuries. In 1793, Roquebrune became French for the first time, changing its name from the original Roccabruna. In 1804 Napoleon built a road along the coastline. This road connected the village to the rest of the Côte d'Azur, and eventually led to its merger with the smaller town of Cap-Martin. Roquebrune then passed into Sardinian hands in 1814 and then back again to France in 1861. During World War II all the coastal area between Italy and Monte Carlo was occupied and administered by the Kingdom of Italy until September 1943.

The area became fashionable in the 1920s and 1930s leading to the construction of several notable buildings including Coco Chanel's La Pausa on Cap Martin and Eileen Gray and Jean Badovici's E-1027.

The Irish poet William Yeats died in the neighbouring town of Menton on January 28, 1939. Yeats's body was buried at a cemetery in Roquebrune until September 1948, when it was exhumed and reburied in Ireland.

Located on Promenade Le Corbusier, a wooden cabin designed by the famous French architect Le Corbusier is hidden amongst the trees and you could easily pass it by without realising is architectural significance. Built between 1951-1952, it is the site where Le Corbusier preferred to spend time in the summers months of August and September. Le Corbusier was famously quoted as saying: "I have a castle on the Riviera which is 3.66 meters by 3.66 meters. I did it for my wife and is an extravagant place of comfort and kindness". This is a slight exaggeration. Designed as a prototype for the "minimum habitat model" or low-cost housing in modern-speak, this small unit has a tiny door and access within the cabin is based on the 'Modulor scale' (basically fitting the internal dimensions perfectly to the height of the inhabitant). 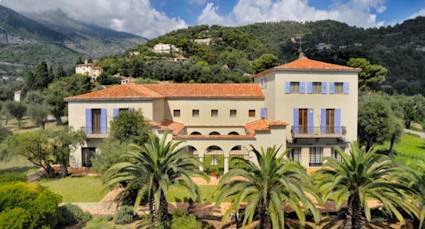 Coco Chanel bought the five acre plot on which La Pausa was built in February 1929. The plot had formerly been part of the hunting grounds of the ruling family of Monaco, the Grimaldis, and contained wild olive and orange groves. The villa was designed by the architect Robert Streitz and built in less than a year later. The final cost of the villa was 6 million francs (it is not clear whether Chanel or her lover, Hugh Grosvenor, 2nd Duke of Westminster financed the building). Either way, this French Riviera vacations villa in Roquebrune-Cap-Martin, France, has witnessed an impressive list of guests. Winston Churchill often stayed at La Pausa villa, as the guest of Wendy Russell, the wife of a wealthy publisher (who bought La Pausa from the proceeds of the foreign-language rights to Churchill's book on the Second World War). Other notable guests hosted included the aristocrats Prince Rainier and Princess Grace of Monaco, the Duke and Duchess of Windsor and the actors Greta Garbo, Errol Flynn and Clark Gable.

The 10th-century chateau at the top of Roquebrun-Cap-Martin has witnessed many sieges over the years. It was restored in the 13th and 15th centuries, and again in the 19th century. 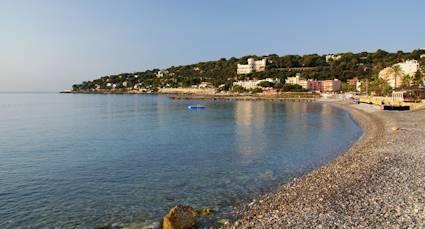 Roquebrune-Cap-Martin, France, is beautifully situated on the French Riviera and enjoys spectacular views of the bay of Menton and the Italian Riviera. This pretty French Riviera vacations resort is one of the most picturesque places to visit on the Côte d’Azur. The beaches around the Roquebrun Cap Martin are stylish and chic, offering visitors a true taste of the Riviera lifestyle. Roquebrun Cap Martin’s proximity to Monaco ensures that it is very popular with visitors throughout the tourist season.

The two most famous beaches in Cap Martin, France, are Plage de Buse and Plage du Golfe Bleu, both of which are public beaches. Roquebrun-Cap-Martin beach is situated on the Eastern side of Cap Martin, long Promenade Cap Martin and Promenade Robert Schuman.

One alternative to the public beaches is the Monte Carlo private beach club. This is situated in a stunning location, looking out over a beautiful Côte d’Azur bay on Cap Martin. This luxurious beach is family friendly, offering a kids’ club, an ice-cream bar, beach volleyball, ping pong, baby foot and WIFI access. There are 200 tents, 120 cabanas and 30 solariums for those wanting additional privacy. It is a luxurious spot to enjoy a sunny afternoon on the French Riviera. The Monte Carlo beach club is about a 20 minute walk to the centre of Monaco, or alternatively there is a shuttle bus operated by the hotel.