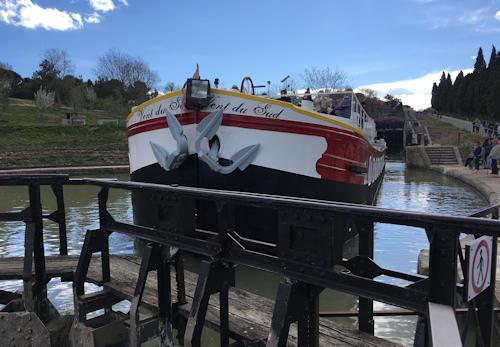 The 9 Locks (Neuf Ecluses) of the Canal du Midi, on the outskirts of Beziers, is a wonderful feat of Engineering and a great place to visit if you are on holiday in south of France during 2022. A series of 9 canal locks allows the canal barges to descend by 20m from the high point of the canal, down to the lower stretch, just by the power of water alone. These ladder like locks are spaced out over 300m and it takes about 30 minutes for the boats to complete the descent. It is not just the timeless Engineering involved in the coordination of the locks, but the lovely curved oval shape of each lock, which is so impressive. This beautiful design also serves the purpose of giving the walls of the locks additional strength, that enables the locks to be drained and filled so quickly. The craftsmanship is quite incredible.

The Canal du Midi was the brainchild of a regional tax collector who was born in Beziers, South France. In 1660, Paul Riquet, persuaded King Louis XIV to endorse a bold project to build a canal network from the Medeterranean to the Atlantic. The plan was that this new trade route would bring prosperity to the South of France and open up new trade routes in Languedoc. The Canal du Midi is 240km long and runs from the River Garonne in Toulouse to the Mediterranean coast at Agde. Construction began in 1667 and took fourteen years to complete. One of the biggest engineering problems to overcome was how to connect the River Garonne at 132m above sea level with the Mediterranean sea. Over its course Paul Riquet built over 99 locks to progressively drop the canal down to sea level. 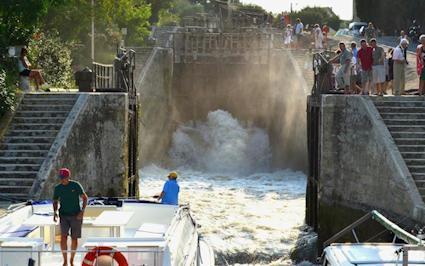 The biggest descent along the Canal du Midi occurs at Beziers, close to Riquet's birthplace in Beziers. The locks are still within beautiful working order and if you are lucky you will catch the site of a barge descending from the top to the bottom. We visited the 9 locks at Beziers last weekend. It has been over 8 years since we were last here and the whole area has been completely transformed. There is a brand new visitor centre, new pathways and a really beautiful restaurant with great views over to Beziers Cathedral. This development is part of a grand plan to improve Beziers and bring in much needed tourist visitors and local residents into the city. This old French town had fallen into a bit of decline over the years, but it is thankfully now showing signs of life and regeneration. Just a word of warning, the nearby car park is without doubt the most expensive car park in the South of France. We got stung for about €7.00 for 1 hour parking. If it hadn't have been so windy, I would have marched the kids back down to the locks again to get our money's worth. To be fair, there is free parking on a Monday and Tuesday.

There is a really nice walk that you can take along the tow path of the Canal du Midi down from the Nine Locks. After about 500m you will find another Engineering masterpiece, namely a viaduct that carries the Canal du Midi over the River Orb. This is the first example in the World of a Canal being transported over a River.

The Canal du Midi proved an almost instant success when it opened in 1681. Unfortunately, its decline was also just as swift. Paul Riquet, the visionary behind the project died 6 months before the Canal du Midi was officially opened. The Canal du Midi had ruined him financially as the building costs soared. However, he continued to drive the project on. By 1856 the Canal was carrying over 100,000 tonnes of freight and 1 million passengers a year. The decline of the Canal du Midi was brought about by the arrival of the railway, as merchants switched to the much quicker railway freighting and the Canal du Midi fell into disuse. It was revived again during the late 1970's and 1980's, when the waterways were cleared and the embankments restored. 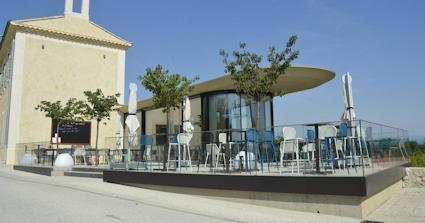 It is possible to bike along the whole of the Canal du Midi and it usually takes about 5 days. You can obviously also hire out boats and barges.

If you are interested in visiting Beziers in the South of France and the nearby Mediterranean coastline, then you can find out more information about the best places to stay, the best restaurants to eat at and the best local beaches to visit: