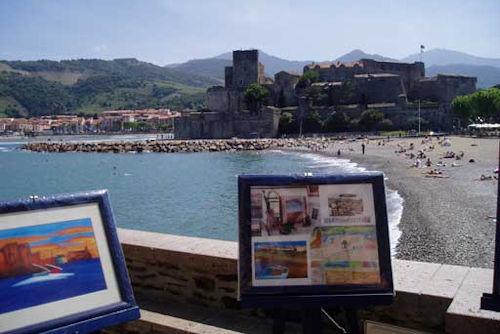 Collioure has over the past 150 years, been home to an immpressive array of artistic talent. Collioure was originally just a relatively poor fishing village, eeking out a living from the Anchovy trade. However, in the early 20th Century, Collioure became home to an important new art movement "Fauvism", with many artists attracted by Collioure's "special light". It is true, every time I have ever visited Collioure it has always been bright and sunny. But it is a special kind of hazy sunlight that reflects back up from the shallow bay. The basis of the Fauvist paintings, was a strong use of colours, whilst still exhibiting elements of the Impressionism painting style. Early Fauvist painters such as Matisse, Derain, Dufy and Rennie McIntosh, were later joined by Picasso, Georges Braque and Maillol in the town.

Today, art is still an important activity in Collioure. With over thirty galleries and many resident artists still working in and around the town, Collioure is right to proclaim itself the "Town of Artists". If you are an art lover, what makes Collioure such a great place to visit is that the locations of many of the famous paintings of the town, are clearly marked out on a special art trail. You can gaze through empty picture frames and see the same view as Matisse or Derain or Raoul Dufy painted over 100 years ago. 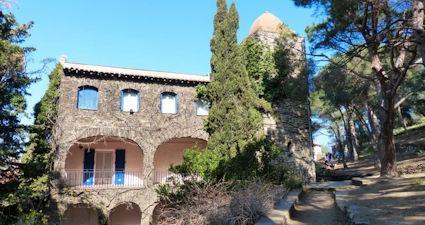 The Museum of Modern Art in Collioure was founded by Jean Peske in 1930. The Museum is houses in the beautiful Villa Pams, on the southern edge of the town. The museum features work by Matisse, Derain, and Maillol. The Museum also has many visiting exhibitions and gives over a large amount of space to contemporary artists. Indeed, since 1990 the winners of the biennial "Prix Collioure" have been invited to Collioure to work in the museum's studio for one year. A large exhibition marks the end of the year. When they leave, the artists give one of their creations to the museum. For more information about the Museum of Modern Art in Collioure, please visit the Collioure Modern art museum. 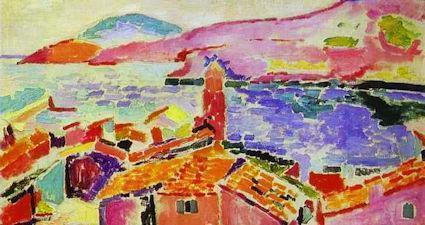 In 1905 Henri Matisse and Andre Derain arrived in Collioure.  Around the town, you will now find over twenty reproductions of their work, displayed close to wherethe artists perched their easels. You will also find metal picture frames mounted on stilts, through which you can also 'frame' the scene that these painters saw. It is quite an ingenious idea and our 3 boys love to look at the the view and then compare it to the painting beside it. Matisse came to Collioure because he was looking to escape the Parisian summer and he needed a cheap residence for his wife, two little boys and his older daughter (by a former mistress). At the time, the Cote Vermeille was bankrupt. Its wine industry had been ravaged by disease in the vines and its fishing business was collapsing. It is surprising that Colioure owes its chic resort status, precisely because Matisse came here to find cheap lodgings in the poverty stricken town. It is one of those ironies of history.

When he arrived in Collioure, Matisse marvelled at the "bright Mediterranean colors and above all by the quality of the light. The light is different".The Cote Vermeille is the only east-facing coast of France. The Pyrenees plunge dramatically down into the Mediterranean. The Mediterranean has almost no tides, so the sun rises over deep blue, clear water with no surf to break the patterns. Also the clouds are pushed out far to sea by the strong Roussillon winds, so the sunlight is reflected mainly off the Medeterranean waters and the dark green and red colours of the Pyrenees. Andre Derain, Matisse's friend and colleague during their summer in Collioure, commented that "Collioure has no shadows." 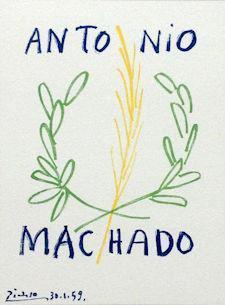 The great Spanish poet Antonio Machado, born in Seville in 1875, was an active supporter of the republican Government in Spain during the mid-thirties. In 1939, he left Barcelona with his family to escape Franco's dictatorship and chose to live in Collioure as exile. He led a secluded life in "Casa Quintana" where he died on February 22, 1939. His mother died 3 days later. Machado has become symbolic of the thousands of Spaniards and Catalans that chose exile in Languedoc. He is buried under a plain tombstone in the old cemetery. Since 1977, the "Antonio Machado Fundation" honors his memory by inviting entries in an international poetry competition every February. Throughout the town there are seminars, symposiums, lectures, castillan dance festivals, and exhibitions. Picasso's poster "Homage to Antonio Machado" is displayed in Collioure's Musee d'Art Moderne.

There is a special Foundation in Collioure, set up to honour Machado's work and legacy. For more information please visit: Foundation Antonio Machado.

Van Gogh in Saint Remy de Provence Van Gogh spent time in two places in the South of France: St Remy de Provence and Arles. In 1889, following the infamous incident where he cut off part of his ear, he was brought to the asylum in St R... 1888 views Fri, 14 Jul 2017

Serignan art museum The little Languedoc coastal town of Serignan, just south of Beziers, is home to not only a modern art gallery, but also a popular contemporary theatre. In the centre of Serignan, a small hard working... 829 views Fri, 11 Aug 2017