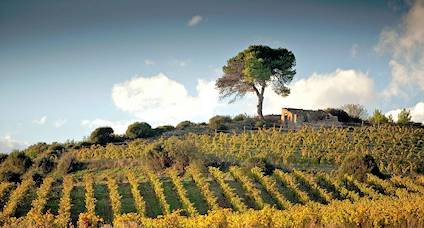 There was a time when the wines of Languedoc in Southern France were looked down upon, even by the French themselves. Indeed, in the early 1900's soldiers had to be despatched into the Languedoc wine villages to put down an open revolt by winemakers protesting over the low wine prices imposed by Parisian wine merchants. But now the French regard the wines from the Languedoc region as amongst the very best wines in France. Here is are all year round report on the Vineyards of Languedoc.

After the flurry of activity around the harvest in September, very little goes on in the Vineyards of Languedoc. True the wines themselves are busy fermenting at the local Co-operative Caves, but out in the vineyards very little seems to be happening. But if you do look closely, all across the Languedoc region what you will see is the careful pruning of the vines to encourage abundant grape growth the following year.

White vans in the vineyards of Languedoc

Every vineyard you look at in Languedoc during October through to March has a little white van parked up in the middle of it and a solitary person working the vines. I don't know why all the vans are white or even why they use vans, (maybe it is some subsidy?) but trust me everywhere you look you will see them in amongst the vineyards. Up and down they go, pruning back the stems of every vine, on every straight row of vines, throughout the whole vineyard. It is hardly backbreaking, but a more boring job you could not imagine. When they are finished, the vine-workers take their bundles of vine wood back to their homes and burn them on their fires. Across every village in Languedoc in the winter you will smell the beautiful fragrance of vine wood wafting out of the Chimneys.

Unlike the summer when there seems to be another festival every week, in the winter the 'fetes' die down. It is only the obligatory Wine Festival, usually in mid-November that punctuates the tranquility. The wine festivals are eagerly awaited in Languedoc as it is the first time the product of the vineyards is tasted and the population know whether it has been a good year or a bad year. Usually you will capture whispers about it being a good year and converstation about the last bumper year, but you never hear if it has been a bad year. Just stoical silence.

Around March time in you will start to see the cute little tractors appearing all over the Languedoc vineyards. From the side these look just like any other tractor. But from the front and back you will see that they have been cut in half in order to fit in the vineyards. Just wide enough for one person to sit in, these little tractors trundle all over Languedoc carefully poughing the soil in between all the vines. They do this to prevent weed growth and encourage good drainage of the soil, when we do get our precious rain.

It almost seems that over one weekend at the beginning of April the whole of the Landscape in Languedoc changed dramatically. Gone were the patchwork of brown ribbed vineyards all across the hills. Now, everywhere you looked the countryside was green. Even the little white vans parked up in the fields were gone. There is still some activity in the fields. The slimmed down tractors are busy spraying the vines to keep the insects at bay. It is also during this spring and summer period than the grapes begin to flourish.

The climate in Languedoc is perfect for wine. The long dry summers under the hot Southern France sun help to grow the grapes rich in sugar and full of tanin in the grape skins. The winters are mild in the Languedoc, the rain when it comes is usually torrential and quickly washes across the soil. The wind also blows through the vineyards. To the north in the Rhone valley, the Mistral cuts through the famous Rhone vineyards like a blade. To the South, in the triangle formed by Narbonne, Carcassonne and Perpignan, the Tramontane blows strong and is home to many wind farms in amongst the vineyards of Fitou, Minervois and Riversaltes.

The Hérault department, France, is named after the Hérault river. It was created in 1790 from...

Collioure has in the past been home to an immpressive array of artistic talent, attracted by Collioure's...

With its four beaches, Collioure in France, has to be up the top of the list as the best Languedoc coastal...