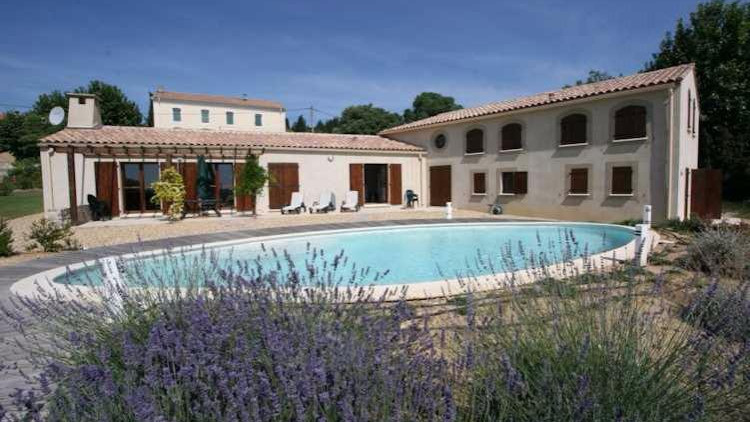 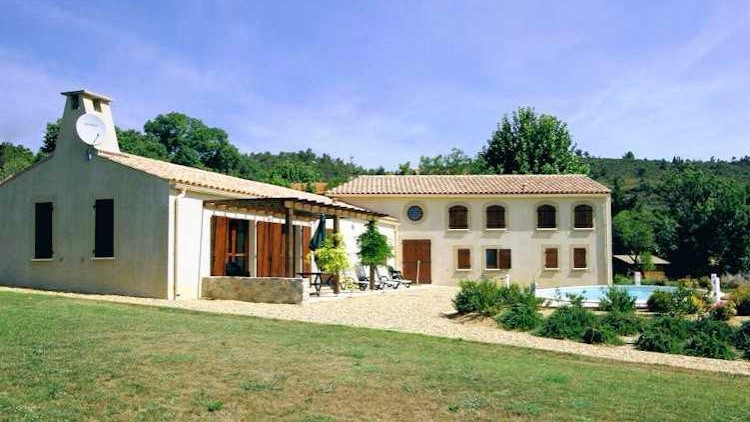 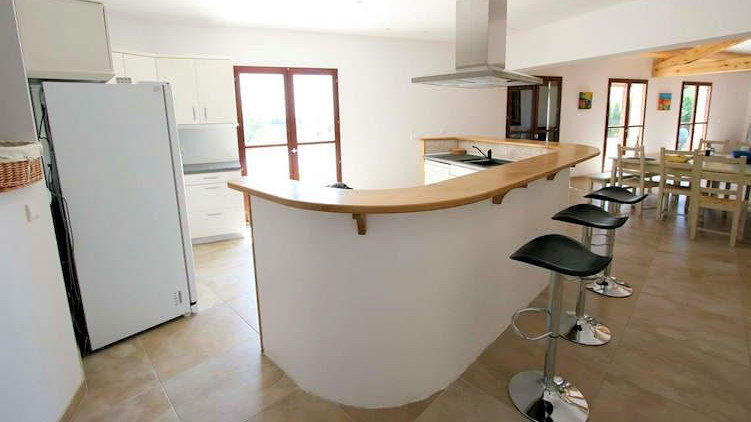 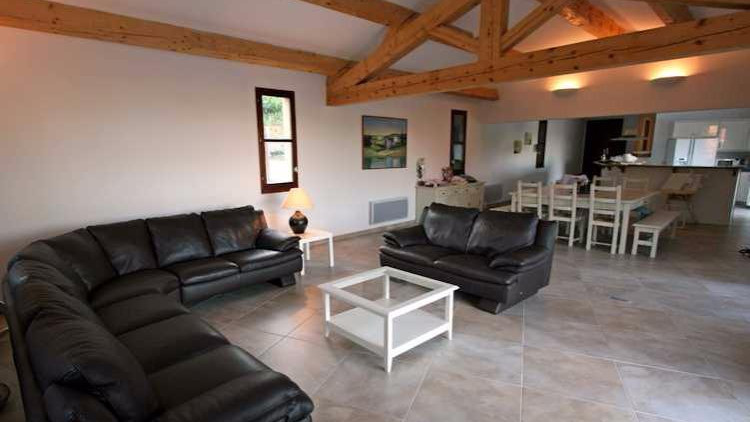 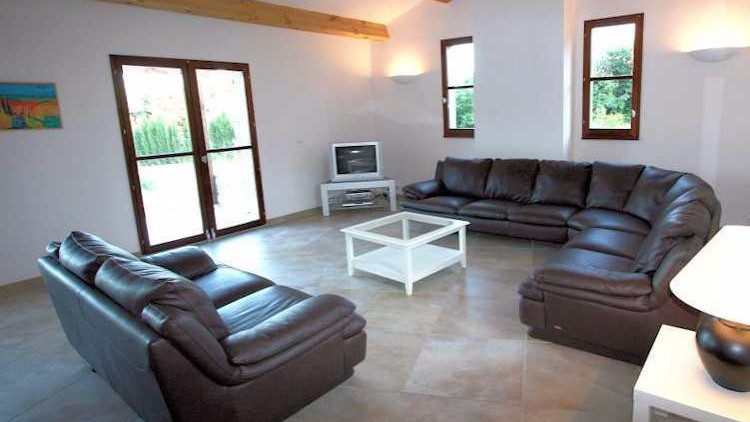 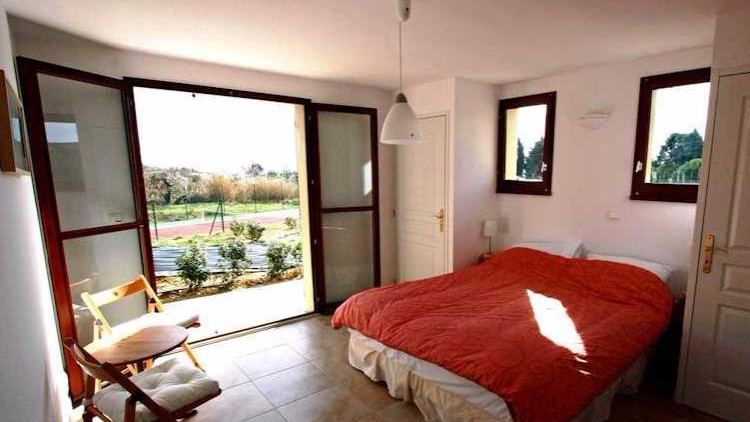 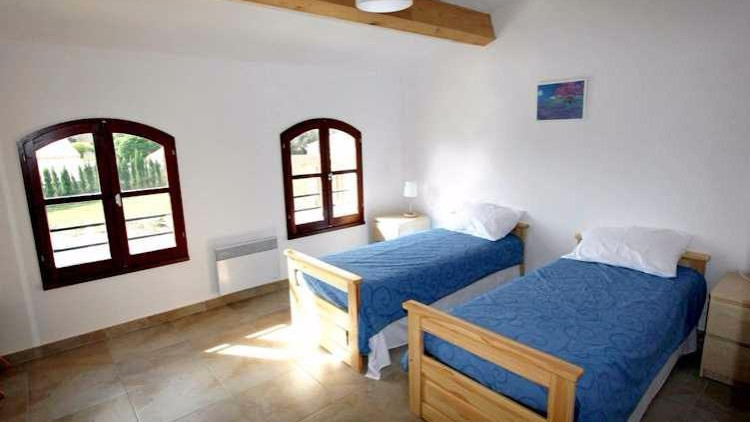 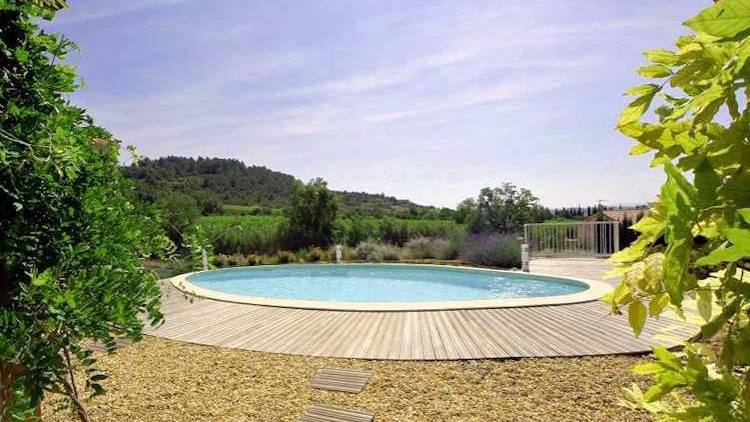 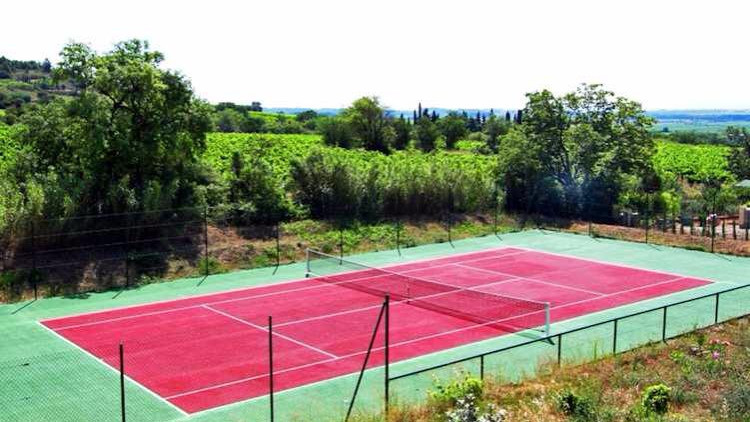 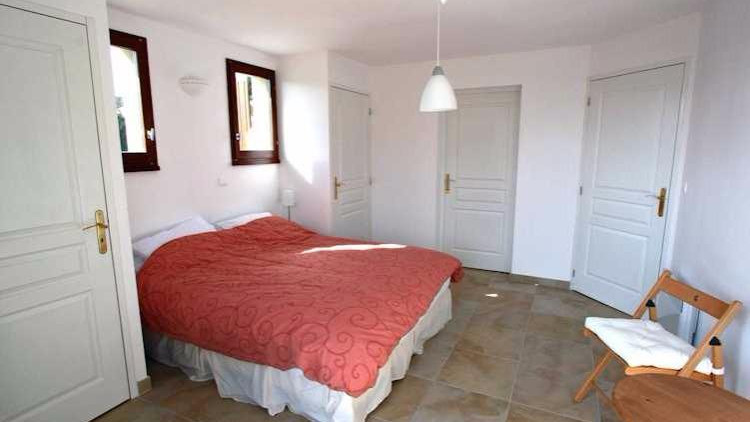 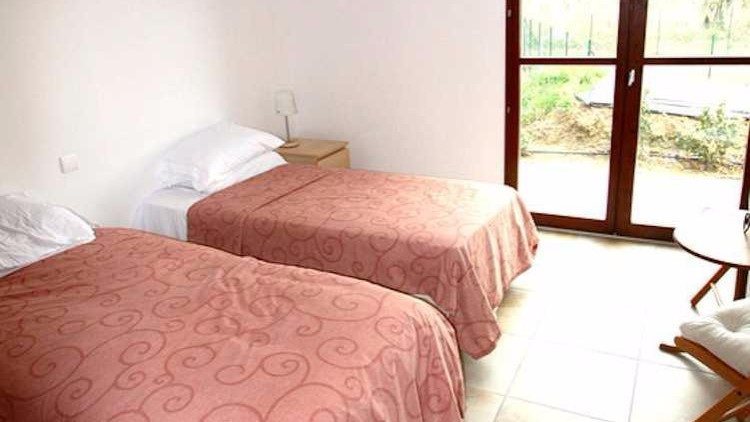 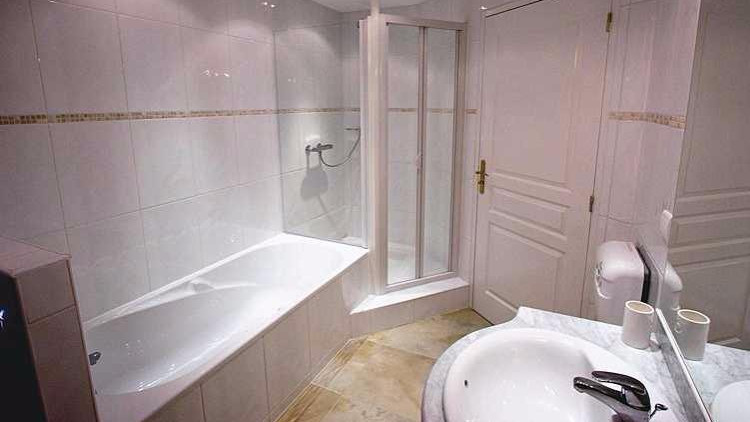 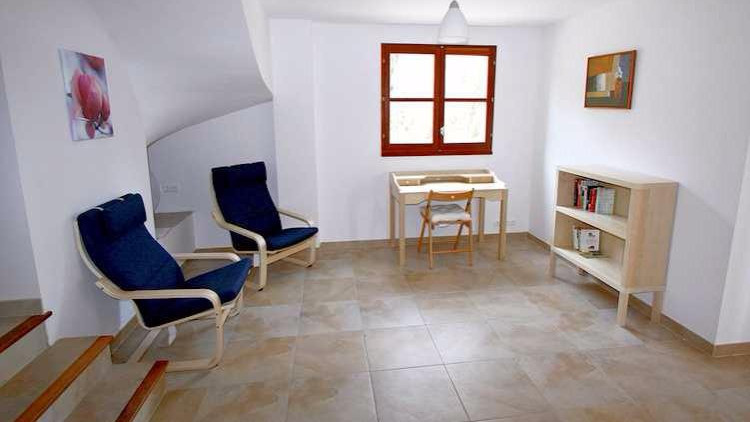 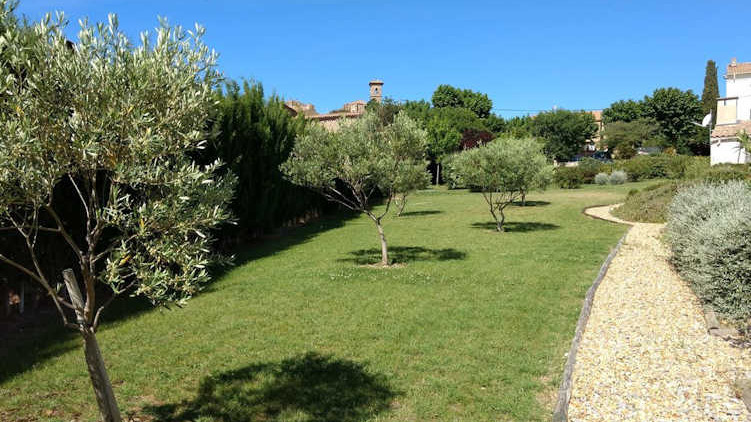 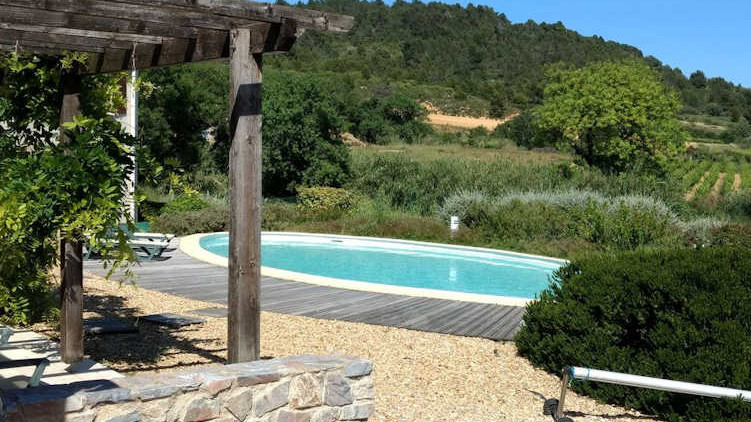 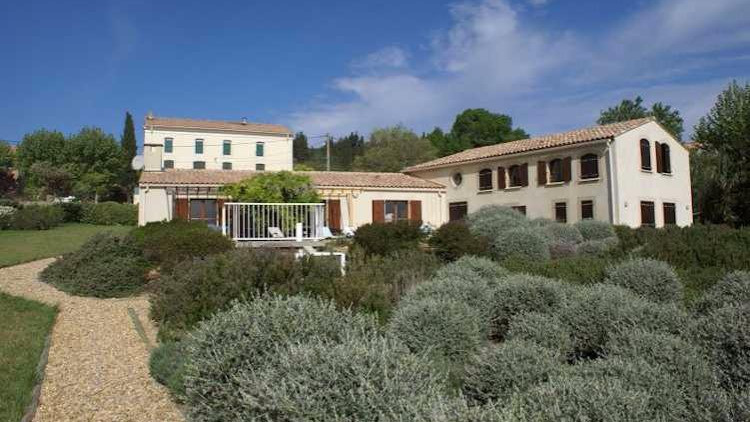 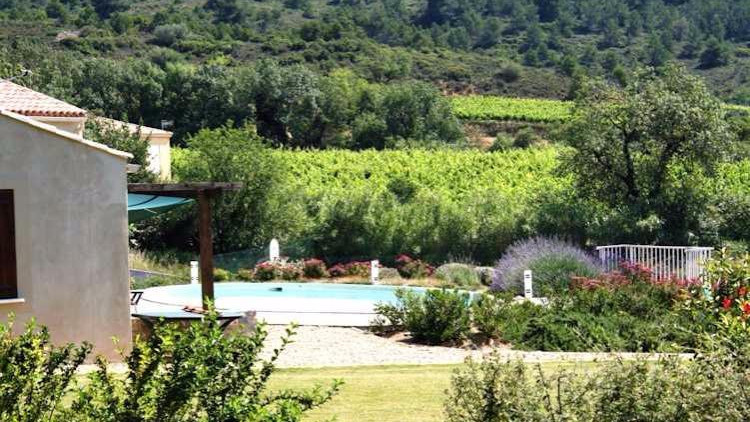 Previous Next
Price From
505 €
per Night

Show details
Save Print
Please choose your resource.
1. Check In Date
Minimum stay (nights): 5
2. Check Out Date 3. Resource Type
There are no free resources for selected dates or includes already occupied. Only days following each other can be booked

Villa Alarelle is a fantastically well-equipped large vacation villa rentals property in the Carcassonne/Narbonne-Beziers region of South France. The villa come with a swimming pool and tennis court and is the perfect vacation spot for an extended family or a group of friends. The villa is located in the historical hillside village of Montouliers with outstanding views overlooking the surrounding vineyards. Villa Alarelle offers 6 bedrooms, 4 Bathrooms, a 70m living area, a fully fitted kitchen, a heated 12.5 metre swimming pool, new hard tennis court and landscaped gardens of approximately one acre. If you are looking for a large and luxurious vacation villa rentals in Southern France, then Villa Alarelle is perfect for you.

Villa Alarelle is a modern architect designed villa that provides all the comforts you could need from your holiday home.

Villa Alarelle has 6 bedrooms in total:

Villa Alarelle has a fantastic swimming pool with decking for those lazy days sat by the pool. It also has a landscaped south facing garden,a covered pergola area for those morning croissants, panoramic views, a barbecue and an excellent tennis court. What could you want!

The landscaped garden comes with a lawn and mature plants. There is also secure outside parking.

Villa Alarelle is available for rental on a weekly basis. The prices include linen, towels and end of stay cleaning.

Last visited May 2020. If you are looking for a large luxury villa rentals property in South France with a private pool, that is equipped and finished to a high standard for a family or group holiday then Villa Alarelle is simply perfect.

The swimming pool and tennis court ensure that the active amongst you are entertained; the panoramic views, patio and excellent local wines ensure that the hard-working Mums get the peace and quiet they deserve! The children also have the Mediterranean beaches to explore and the tow path of the Canal du Midi to cycle along.

This large villa rental in South France is located in the village of Montouliers in the Minervois wine region. The surrounding area offers a variety of things to do depending on your interests.

For a family with young children the Mediterranean beaches are a must. The beaches are kept clean and dogs are not permitted on them. Swimming is safe with plenty of lifeguards in season. A trip through the etangs (salt lakes) that run from Narbonne down to Peyriac de Mer is worth the visit just to see the pink flamingos. A little further south is the African wild life park Sigean.

An afternoon boat ride on the Canal du Midi is a must. The departure takes place in Homps, 5km from Olonzac. Returning to your port of call, one could have a late afternoon drink or an al fresco dinner at one of the many restaurants right on the edge of the canal .

Being a fantastic area for hiking and cycling, hire bikes that can be delivered to your door. You will have plenty of choices of routes including the canal towpaths and local roads through the vineyards.

The village of Minerve (seven kilometres from the houses) was a strategic place for the Cathars and an important stopover for the pilgrims on their way to Santiago de Compostelle in Spain during the medieval times. It was also the home of Simon de Montfort. The Fontfroide Abbey, along with the abbeys Fontcaude and Lagrasse are all less than half an hour away. The ruined but still spectacular fortresses of Peyrepertuse, Montsegur and Queribus are the scenes of the last desperate struggles of the Cathar rebels.

Carcassonne and its famous medieval castle, which has been seen in a number of films, has a wonderful covered market and an 18-hole golf course. For Bastille day, 14th July, Carcassonne becomes one of the busiest places in France and hosts a spectacular fire-works display.

Pezenas is where the famous French playwright, Moliere, used to spend his summers away from Paris. His plays are now being performed there on a regular basis. Further along, you can visit the Pont du Gard a Roman Aqueduct, and the cities of Arles and Nimes, both graced with arenas dedicated to bullfighting also dating back to the Roman era.

There is a beautiful covered market in Narbonne, Les Halles where the quality of food is excellent from butchers through fishmongers. It operates from Monday to Saturday and is augmented every Thursday and Sunday by a huge market both sides of the Robine Canal, a tributary of the Canal du Midi. Narbonne dates back to pre-Roman times.

Many important wine cellars are scattered all around the region, and sampling is encouraged. On the way to Beziers (20 kilometres) stop in Bize-Minervois, a small village that has a well know olive cellar. There you can buy many different types of olive oils, olives (black or green), numerous types of jams, crafts, soaps, and much more.

More adventurous shopping can be done in Andorra, high in the Pyrenees, a tax-free haven about 3 hours south.

Montpellier is a beautiful university town and is one of the fastest growing city in France. Montpellier is about 1hr 15mins drive away. Spain and the Pyrenees are approximately an hour away.

If you are arriving by train to Villa Alarelle you will find train stations at Narbonne (fast train connections to Paris from here) and Carcassonne both 30 minutes away.

Villa Alarelle is situated in the village of Montouliers in the Herault department just 3km north of the D5, the main Beziers-Carcassonne road and about 20-25 minutes drive to junctions 36-38 of the A9 motorway.

Currently there are no reviews.

Booking policies for Villa Alarelle are as follows:

25% deposit at time of reservation. Balance due 8 weeks prior to arrival. €500 security deposit. The rental prices includes the linen, towels and end of stay cleaning.