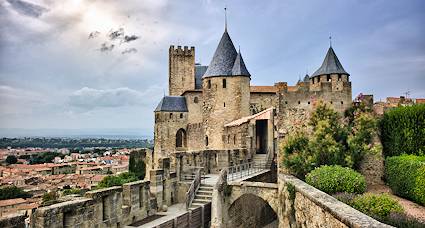 The Aude department in the South of France is named after the river Aude, but it also goes under the title of "Cathar Country" on account of its many Cathar relics. The Aude department is located between the Mediterranean Sea and the Pyrenees mountains and it is surrounded by the departments of Pyrénées-Orientales, Ariège, Haute-Garonne, Tarn, and Hérault, with the Golfe du Lion to the east. In the east of the Aude department, the landscape contains coastal lakes, flat plains and long sandy beaches. The Corbières Hills form the central part of the department. To the north and west of the Aude Department, the Black Mountains provide spectacular scenary and excellent hiking trails.

Where is Aude in France?

The Minervois area of the Aude department is an important wine region in France. In 2009, a wine from the Minervois was selected as the best win in the world by a panel of Grand Wine Sommeliers. Another important wine area is the Corbieres and the sparkling wines from Limoux are also celebrated in this area of France. The regional dish of the Aude deartment is the Cassoulet, a rich stew made from duck, pork and white beans.

History of the Aude department in France

In the 13th century, the Aude region, France, saw the development of Catharism, a Christian sect which was quickly judged to be heretical by the Catholic Church. Faced with its growing strength in the counties of Carcassonne Albi and Toulouse, in 1209, Pope Innocent III, declared a crusade against the Cathars. The barons of the north united to form an army under the command of Simon de Montfort. The city of Carcassonne became the refuge of numerous Cathars.

Carcassonne has been restored to much of its medieval appearance. Narbonne is a tourist destination due to its Roman ruins. Other towns and villages worth visiting include Limoux, Quillan, Lézignan-Corbières, Lagrasse, Sigean and Leucate. The Aude department has many castles such as the castles of Quéribus and Lastours. The Fontfroide Abbey, is also an important tourist site.

The Aude department is an important tourism region of France. With a sandy coastline along the Mediterranean sea, beautiful Cathar relics, thousands of hectares of vineyards and some interesting historical sites, the Aude region is a popular destination for tourists. Amongst the important towns and villages include: 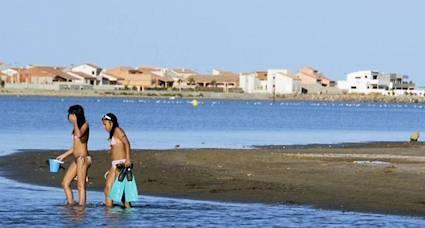 Carcassonne: situated in the Aude department, the town of Carcassonne is famous throughout France on account of its splendid castle. Carcassonne's castle, a UNESCO World Heritage site, is the second most visited monument outside of Paris. The scale of the Castle, with a full town located within its walls, is amazing.

Narbonne: this former Roman city was once the regional capital of the Languedoc province. At the centre of Narbonne, there is an impressive cathedral, underground Roman grain-store, and canal-side quays. Narbonne is situated in the Aude department.

Lagrasse: a lovely medieval village in between Narbonne and Carcassonne

Quillan: this town in Aude France, is situated in the foothills of the Pyrenees and offers plenty of good routes for walking and cycling

Gruissan: this coastal town popularised by the film Betty Blue, is a town of two halves. The old centre is built around an inland lake that is used for fishing and the cultivation of oysters and mussels. The beach resort part of the town provides a large expanse of golden sand and a collection of holiday beach huts all perched on stilts.

The climate in the Aude department is primarily Mediterranean, with long hot summer months. However, during the autumn there are often many violent storms and strong winds. It is one of the windiest departments in France, with 300 to 350 days of wind per year. The Tramontane is a strong wind that plagues this area during October through to February. As a result, of the wind, the area is now an important centre for wind farms.

On Go Languedoc we feature a number of holiday rentals in the Aude department, France. Here we feature some of our more popular Aude holiday gites and villas:

This French villa rentals property is a beautifully restored French villa that comes with 5 bedrooms (4 en-suite), a large mature garden, a lovely swimming pool and a garage with table tennis table. This lovely stone property is located in the greater Narbonne area, in the heart of a village with shops and restaurants. The very recent renovation work has been carried out sympathetically and the house now offers all the modern comforts. The shaded terrace is overlooking the swimming pool and the nicely landscaped garden.

More information on this French villa rentals property near Narbonne

Set in the historical hillside village of Montouliers with outstanding views overlooking the surrounding vineyards, Villa Alarelle is a fantastically well-equipped large luxury South of France villa rental with pool for an extended family or a group. Villa Alarelle, South of France villa rental offers 6 Bedrooms (sleeps 12+2), a solar heated 12.5 metre swimming pool, new hard tennis court, wifi internet, 70m living area, landscaped gardens of approximately one acre, 4 Bathrooms (2 en suite) and a fully fitted kitchen and separate utility room. If you are looking for a large South of France luxurious villa rental in Aude, amongst the beautiful vineyards of the Minervois, close to Carcassonne, then Villa Alarelle is perfect.

This traditional stone farmhouse with private pool is 30 Mins from the beach ina peaceful location but close to shops and activity,Sleeps up to 12/13 people (5 Bedrooms). A 120 year old stone farm house lovingly restored in a French style but with modern, open and comfortable living space (over 2,500 square feet). The large outside pool and private garden is perfect for sunbathing / BBQ/ kids play area. The house is also well equipped for family entertainment with Wi-Fi, a table tennis table, bikes, table football, magnetic darts board and many other games.

This Carcassonne vacation rental is a renovated farmhouse with 5 bedrooms and a large private swimming pool, conveniently situated on the outskirts of the mediaeval village of Fanjeaux in between Carcassonne and Mirepoix. The Farmhouse is equipped to a high standard. Tastefully furnished with Danish and international designed furniture, Oriental rugs, modern paintings and traditional local furniture. The Farmhouse is attached on one side to a working farm but is very private and surrounded by high hedges and a hectare of land. Sleeps 8 in comfort.

Where is Cassis France? Cassis, France, is a town 20 kilometres (12 miles) east of Marseille in the department of Bouches-du-Rhône in the Provence-Alpes-Côte d'Azur region of southern France. Cassis lies between Marseill... 3568 views Sun, 14 Mar 2021

Ecluses de Fonseranes, Beziers 9 locks o... The 9 Locks (Neuf Ecluses) of the Canal du Midi, on the outskirts of Beziers, is a wonderful feat of Engineering. A series of 9 canal locks allows the canal barges to descend by 20m from the high poin... 1426 views Tue, 02 Feb 2021

Visit Nice in July The weather in Nice in July is exceptional, making it the perfect place to visit for your summer vacation. With average daily temperatures of around 28oC/80F, the days are usually hot and sunny. Durin... 3069 views Sun, 14 Mar 2021

Best Languedoc restaurants If you are looking for a good place to eat in Languedoc, then follow the Go Languedoc guide to the best bistros and restaurants in Languedoc. The Languedoc has such a diverse range of good food and ... 895 views Sun, 14 Mar 2021