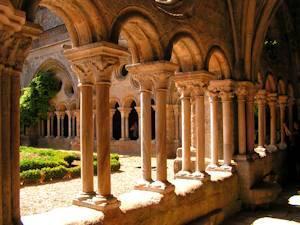 The restaurant at the Abbaye de Fontfroide is a real treat. The "Table of Fontfroide" is open every day for lunch and dinner from March 17 until November. You're are well advised to book in advance (Tel.: 04 68 41 02 26; Fax: 04 68 45 50 69 or E-mail: This email address is being protected from spambots. You need JavaScript enabled to view it.). The less expensive lunch serves traditional dishes at around Euros 15. For the evening meal the menu is strictly gastronomique with a price to match (around Euros 30 per head). But there again how many times are you going to eat in a monastery?

Abbaye de FontFroide is located just south of Narbonne. Take exits 'Narbonne-sud' or 'Lezignan-Corbieres' off the A61 (in between Narbonne and Carcassonne). The Abbey is well signposted along the RD 613, but be careful it is a narrow turn-off. Follow this road for about 4km until you arrive at the thick-set walls of the AbbeyAbbaye de Fontfroide is open every day all year around. The visits are guided only (in English, German, Italian, Spanish and Dutch, if you book in advance), and last roughly an hour. The times of departure vary according to seasons, but are generally on the hour from 10.00 till 16.00. The dogs are prohibited during the visit (hurrah!!). The entrance price is Adults: 9 Euros ; Young people (18-25 years): 6 Euros ; Child (10-18 years): 2 Euros . Group (more than 20 people): 7 Euros 50 each. It is probably best to visit Abbaye de Fontfroide early in the day or late afternoon as it can get busy.

Things to do in Montpellier France: Muse... Montpellier's famed Modern Art Museum, Musee Fabre, has just completed a Euros 62m facelift. The museum has added a new wing and constructed a new walkway up to Musee Fabre. If you are looking for... 3579 views Thu, 11 Mar 2021

Van Gogh in Saint Remy de Provence Van Gogh spent time in two places in the South of France: St Remy de Provence and Arles. In 1889, following the infamous incident where he cut off part of his ear, he was brought to the asylum in St R... 2888 views Sun, 14 Mar 2021

La Bambouseraie bamboo gardens Close to Nimes, you will find this wonderfully exotic garden, perfect for spending a day out in Languedoc. Created in 1855, La Bambouseraie was the first collection of bamboo plants seen in Europe. ... 1405 views Tue, 16 Mar 2021

Best Languedoc Museums If you are a lover of history then you are in luck in the South of France. There are some excellent Languedoc museums covering a range of historical periods from the Dinosaurs through to the local res... 1375 views Thu, 11 Mar 2021