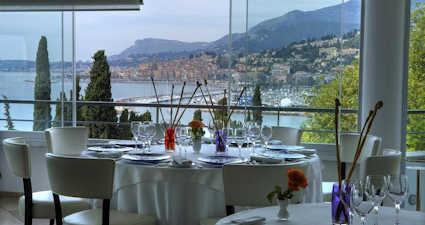 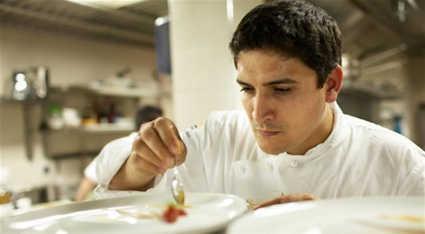 Mauro Colagreco is renknowed for combining bold flavours and his presentation of the dishes is second to none. Using local ingredients (both Italian and French) and vegetables hand-grown in the kitchen garden; the Mirazur menu draws heavily on locally reared poultry and meat, as well as fish and seafood harvested in the local waters. I see a lot of parallels between the work of Mauro Colagreco and Gilles Goujan from the Auberge de Vieux Puits (my favourite restaurant in the South of France. Both draw heavily on hand-grown vegetables, herbs and flowers and both use novel cooking techniques to accentuate the natural ingredients (rather than just trying to be novel).

Mauro Colagreco's signature dish is the Langoustine in Dashi Broth, closely followed by his Gamberoni di San Remo, which uses the fresh prawns reared on the Italian Ligurian coast. The judges for the 50 World's Best Restaurants identified Colagreco's Beetroot and osietre caviar as the standout dish on the menu.

The Mirazur restaurant is located in a 1950's art deco inspired building, with a lovely dining room providing panoramic views over the bay of Garavan towards Menton. The restaurant is laid out over 3 storeys and surrounding the restaurant is the large kitchen garden where Colagreco grows the vegetables, herbs, advocados and citrus fruits (for which Menton is famous for).

You will find the Mirazur restaurant at 30 avenue Aristide Briand, Menton, France. For reservations either call (+33 4 92 41 86 86) or email a reservation to Mirazur Menton.

If you are looking for some famous places to visit in France during 2020, then here is a list of my 10...

L'Isle sur Sorgue is often regarded as one of the prettiest towns in Provence to visit. Located on the...