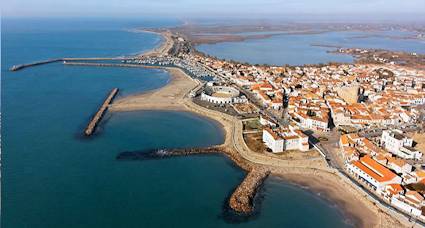 Saintes-Maries-de-la-Mer is situated on the Camargue coast, of Languedoc (see Petite Camargue). Although the place is tiny, it is absolutely heaving in the summer. The place itself is a fairly non-descript sort of place, but you can imagine that for centuries fishermen have dragged their boats and their catch up onto the beach - just as they do now. What makes Les Saintes-Maries-de-la-Mer standout however has been the succession of pilgrims that have visited it for centuries.

A huge gypsy fair is held in Les Saintes-Maries-de-la-Mer every year towards the end of May. This fair has a long old history. The story starts shortly after the Crucifixion of Christ, when many of his disciples were being hunted out of Palestine. One group of disciples boarded a boat, which according to legend had no sail or oars and was guided by God across the Mediterranean to Provence. This group contained Lazarus, Mary Magdalene, Maria Jacobe, Maria Salome and Lazarus' sister Mary Martha. On arrival, Mary Martha went north to Tarason, Lazarus and Mary Magdalene went east towards Marseille and the other two remained in the Camargue. Here they built a small church and lived out their lives quietly. They had a local gypsy servant Sara, who has since been adopted as the patron saint of all gypsies.

The Musee Baroncelli, located in Les Saintes-Maries-de-la-Mer, is a small museum dedicated to the flora and fauna of the Camargue region.

Montpellier tourism: things to do in Mon... I Love going to the city Montpellier in South France. It makes such a change from our sleepy little Languedoc village. Montpellier in contrast is a buzzing, vibrant, youthful, bright, and culture... 2758 views Mon, 13 Mar 2017

Avignon France tourism information Avignon arrived on the World's stage when in 1303 the Vatican decided to move away from the anarchic violence of Rome to the peaceful pastures of Provence. Although they only stayed for 70 years t... 1902 views Sun, 16 Jul 2017

Nimes travel guide Nimes will always be linked with two things: Romans and Denim jeans. The centre of Nimes is home to a bustling commercial district, with winding streets hiding a plethora of boutiques and artisanale s... 2342 views Mon, 21 Dec 2020