The Cap d'Agde resort in the South of France is the biggest holiday resort in France. Famed for its 14km of sandy beaches, clear turquoise waters and steady supply of Mediterranean sunshine, the resort itself hides an interesting history.Cap d'Agde is located about 20 minutes drive south-east of Beziers in the Languedoc region of Southern France. This Mediterranean resort is 5kms away from the old French town of Agde, situated on the banks of the Herault river. The resort is set around a small peninsula which encompasses a large central harbour and 11 main supervised beaches. The resort is well set up for holidays with a range of activities on offer from sailing to golf, horse riding, go-karting, kitesurfing and jet-skiing. You will also find a popular water park (Aqualand), a dinosaur themed amusement park for younger children, as well as a full scale theme park for bigger kids.

My favourite part of Cap d'Agde is to the South. Here you will find the old fishing port of Grau d'Agde, which has some excellent restaurants (L'Kalamar and Les Vagues). Further south you will find the really tranquil beach of La Tamarissiere (or La Tiramasu as our kids call it). Overall though, my favourite Cap d'Agde beach has to be Rochelongue. It is not quite as busy as some of the others and it has a really cool cafe bar on the beach.

The region around Cap d'Agde was first founded by the Greeks. They built a sea port at Agde in the 5th century BC. The Musee de l'Ephebe displays many of the Greek and Roman artifacts found around the region. Agde itself is an OK-ish town. It became a bit run-down during the 1980s and 1990s, although the local council are now trying to revive its fortunes. There are some nice restaurants on the river bank and the Cathedral made from dark lava stone looks particularly impressive lit up at night.

The area is situated on an extinct volcano - Mont Saint-Loup - and it is well worth a walk up to the top to catch the views over Cap d'Agde and up to Sete in the north. Mont Saint-Loup was the scene of a fairly fierce battle during the second world war and you can still see some of the reinforced fox-holes in the woods.

From Richelieu beach you look out across the sea to the Fort de Brescou. Built around 1680, this fortfication eventually became a bit of an Alcatraz - housing French political prisoners until 1851. You take a boat trip out to Fort de Brescou and visit the tiny prison cells. 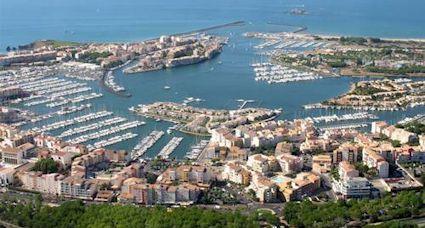 The land adjoining the long sandy beach at Cap d'Agde was for many years covered with olive groves behind the sand dunes adjoining the beach. After the Second World War the area became popular with campers, many of whom liked to swim and to sunbathe nude. Two enterprising brothers spotted a good opportunity and developed the first caravanning and camping resort. The camp grew increasingly popular, especially with German and Dutch tourists. In the early 1970s the government of Georges Pompidou drew up plans for the development of the Languedoc-Roussillon coastline. Naturism initially had no part in these proposals, but Rene Oltra, one of the brothers, persuaded the authorities to include plans for a naturist resort at Cap d'Agde. In 1973 the beach was officially designated as a naturist beach. The Naturist Village became a controlled zone during the season with regulated access. Everyone entering was informed of the regulations and required to comply with them. The Naturist Village continued to prove a popular resort and it developed an easy and pleasant atmosphere. There were so many German visitors that the Post Office even had a designated post-box for letters and postcards being sent to Germany. During the 1990s, the resort became associated with many 'swinging' and 'libertine' nightclubs and a part of the naturist beach was reserved for people to engage in sex acts in front of others - careful where you put your towel !.

Nowadays, think of Cap d'Agde and you probably think of the naturist beaches (or noo-de-doody beaches as my children call them) and the large Naturism town situated in the heart of cap d'Agde. This naturism resort is actually the most popular naturist location in Europe. In summertime, the population of Cap d'Agde naturists resort rises to as many as 40,000 and it promotes itself as one of the best naturism destinations in the world. At the heart of cap d'Agde's naturist town you will find over 30 restaurants catering for every taste from a pizza, Mexican, fish restaurants and romantic French bistros overlooking the naturist beach. Within the naturist town there are many grocery stores, bakeries, bank, and even a post office.

Cap d'Agde tourist office is conveniently located on a roundabout as you enter the town (Rond-point du Bon Accueil). In the height of the season it is open from 9.00am to 7.00pm (tel: