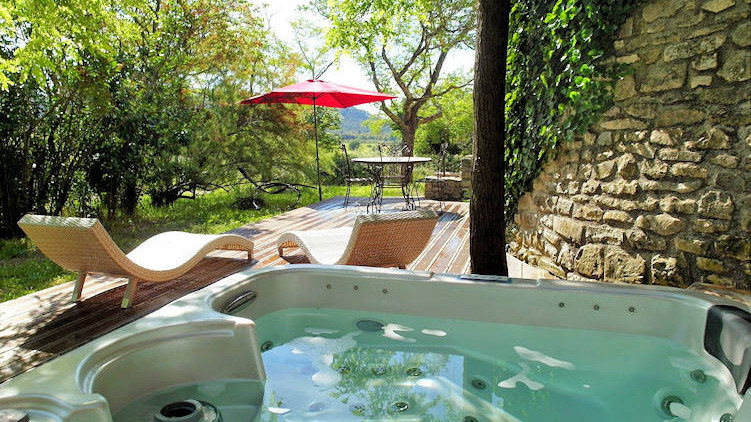 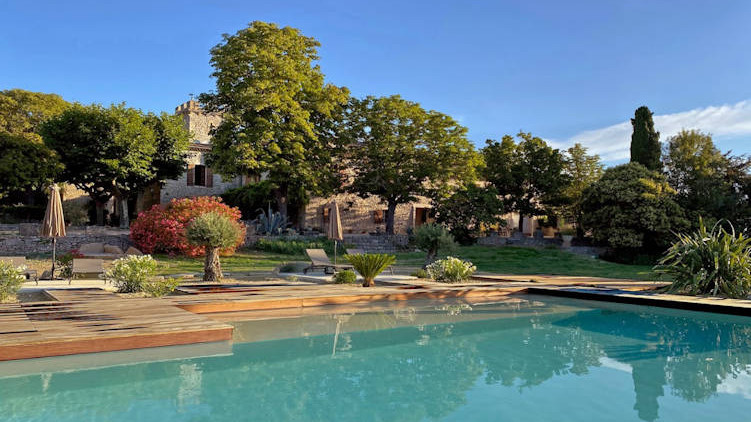 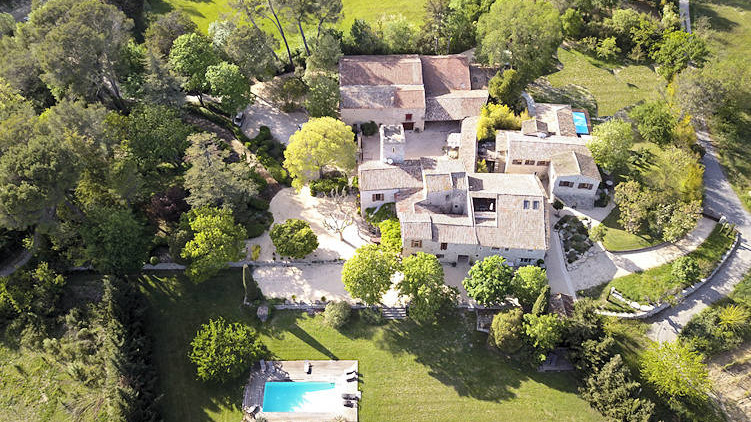 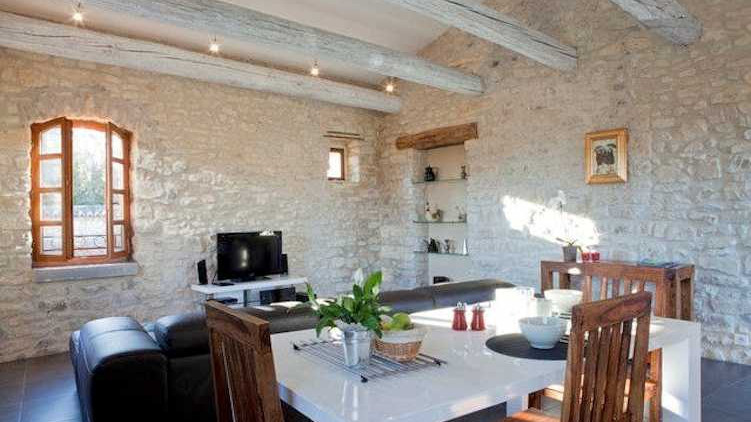 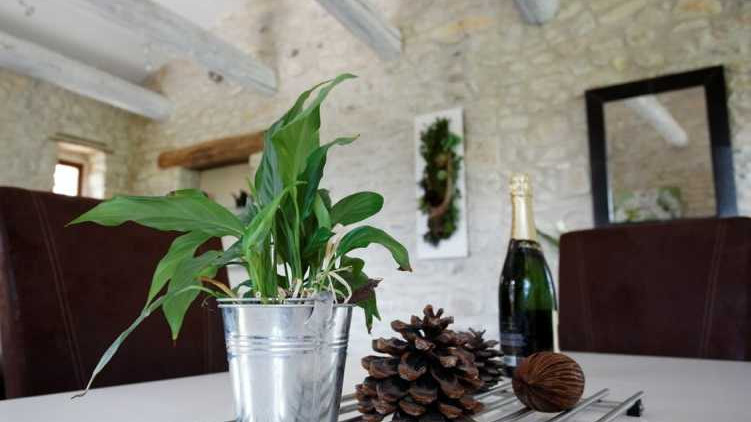 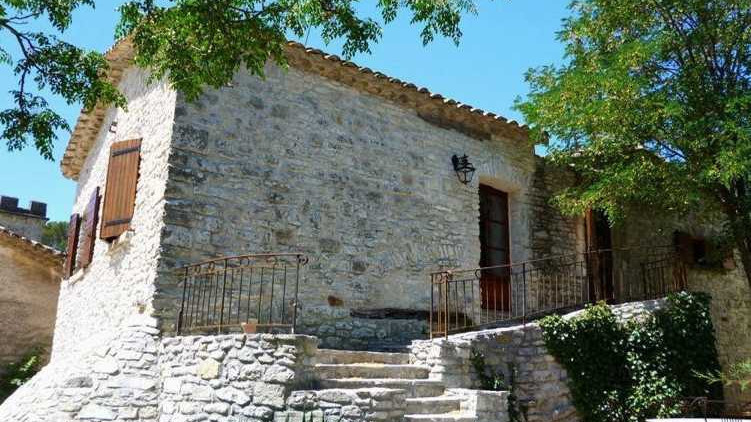 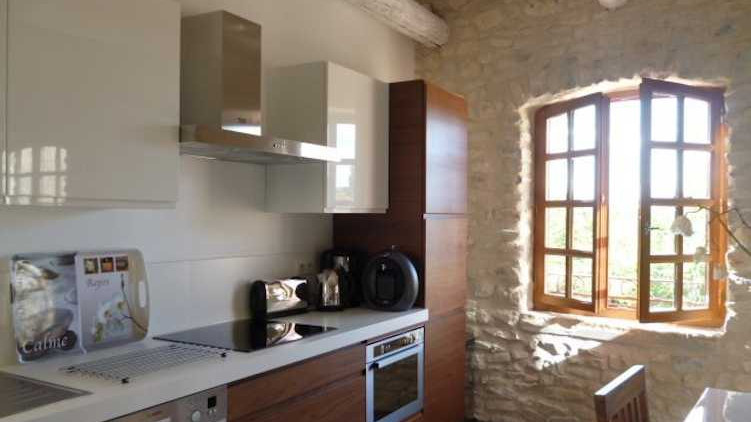 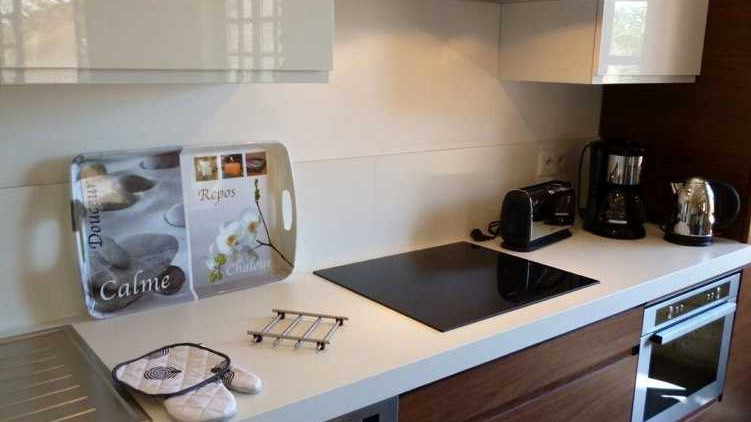 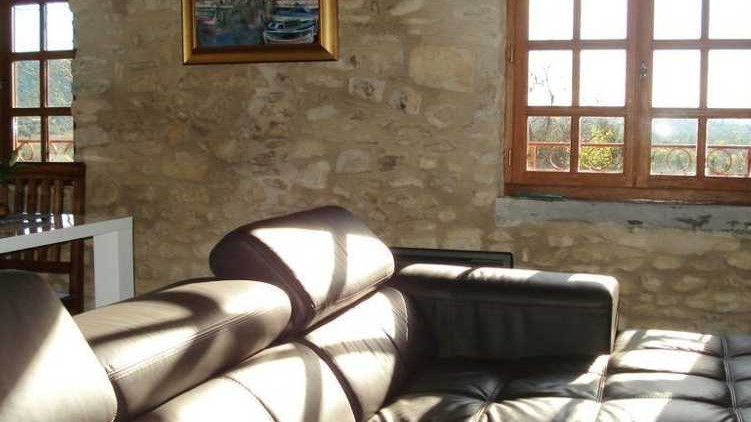 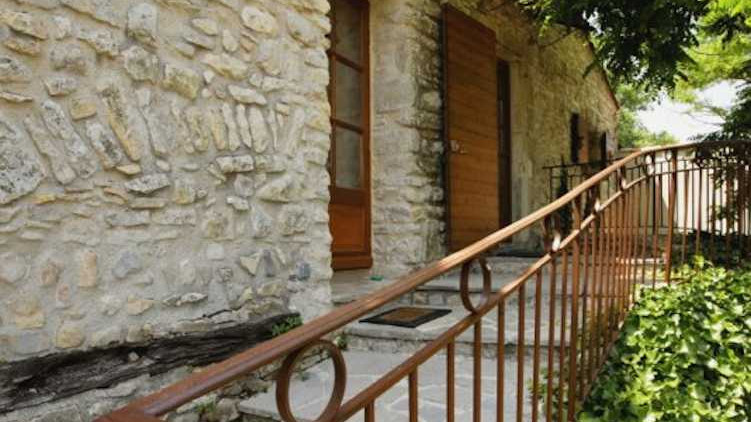 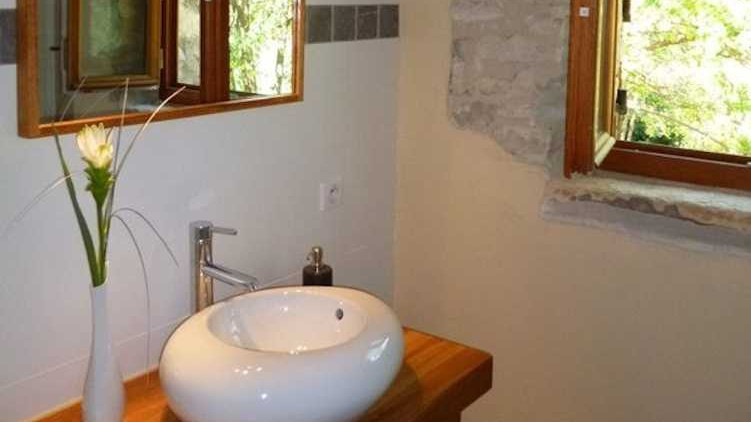 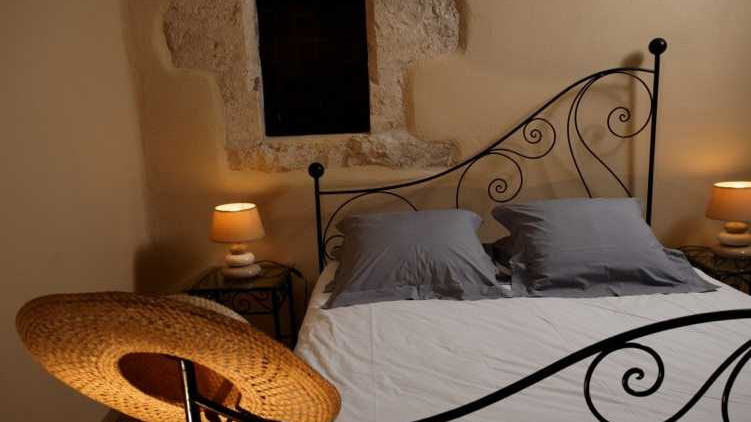 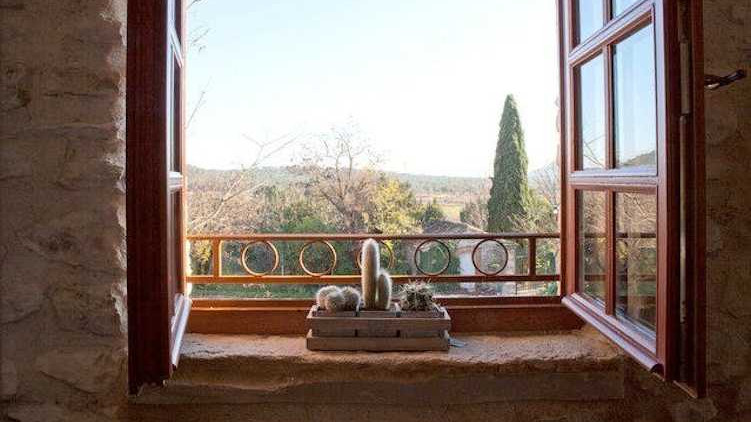 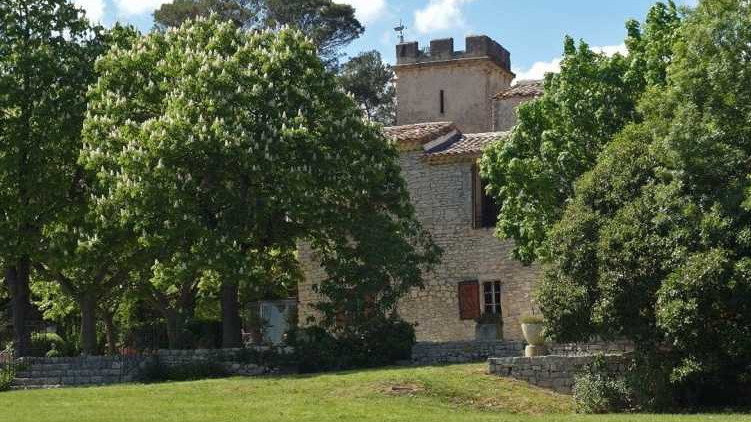 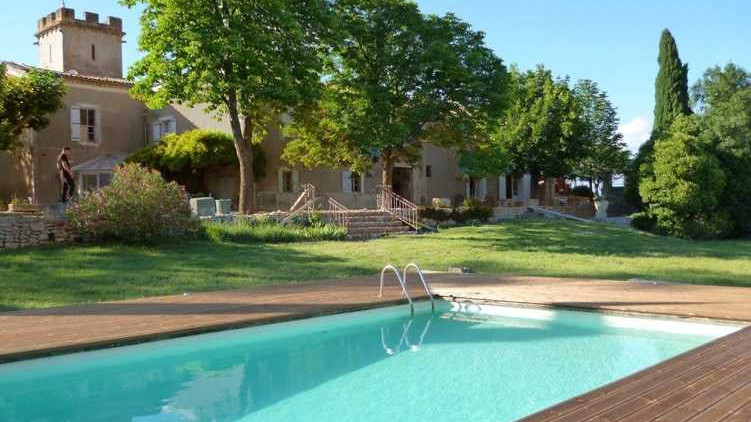 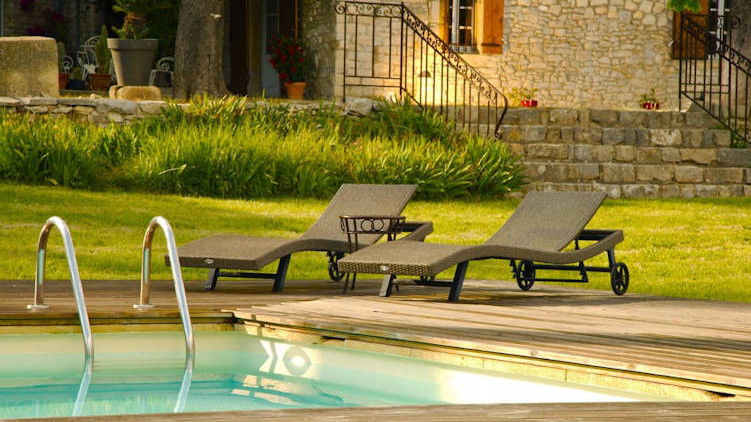 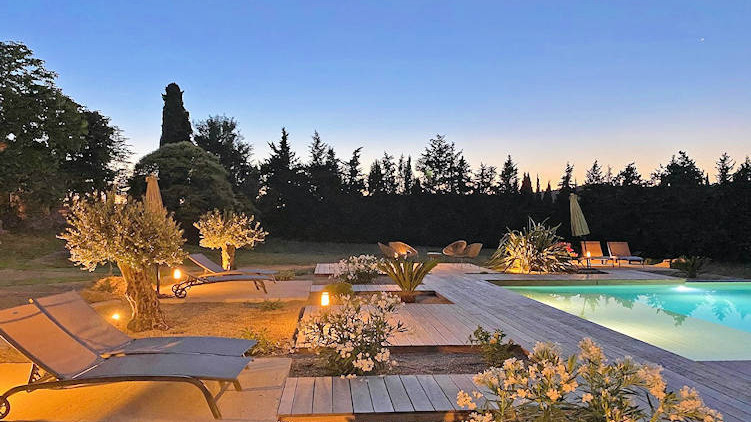 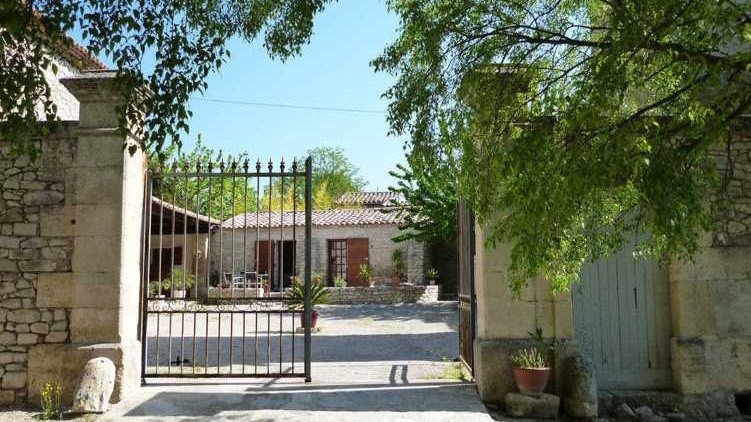 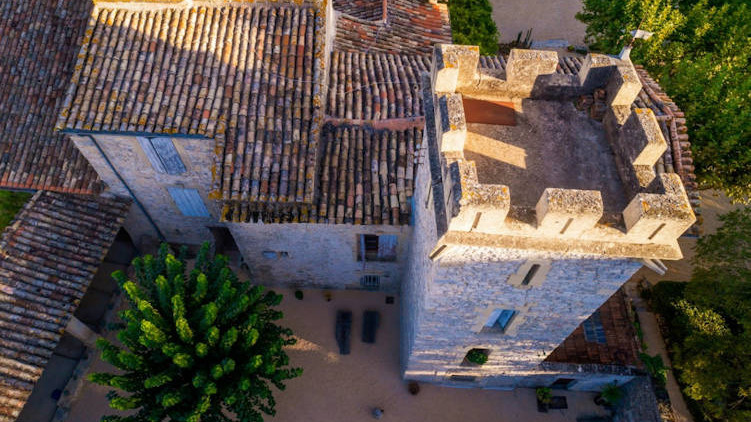 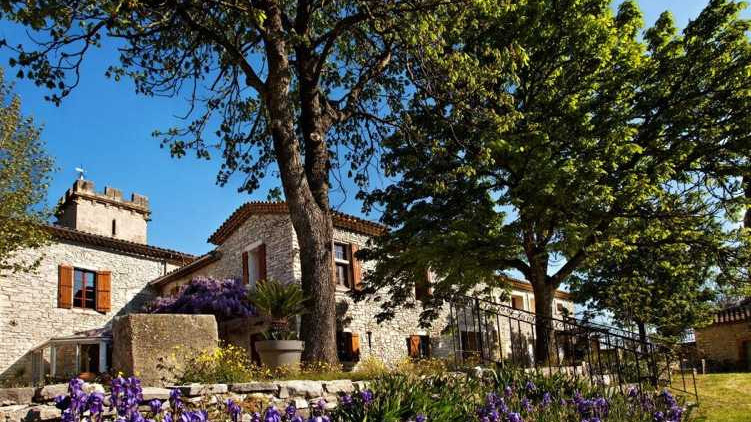 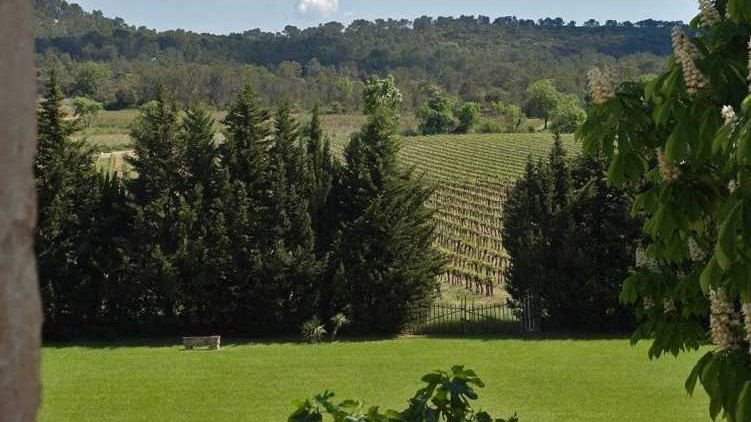 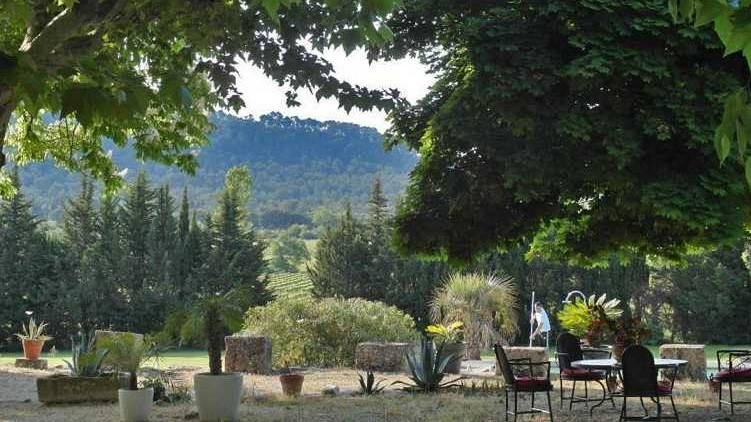 Previous Next
Price From
122 €
per Night

1Reviews 4.8
Show details
Save Print
Please choose your resource.
1. Check In Date
Minimum stay (nights): 5
2. Check Out Date 3. Resource Type
There are no free resources for selected dates or includes already occupied. Only days following each other can be booked 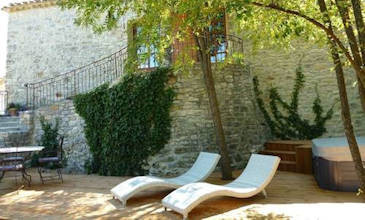 The parking, garden and swimming pool are shared with the neighbouring properties.

If you are looking for a romantic getaway or the perfect location for your honeymoon in France, then these luxury gites are the obvious choice. La Violette gite is surrounded by stunning scenery and equipped to the highest standard.

These luxury gites are situated at Domaine de Monteils, a former monastery.  The gites are conveniently located close to the budget airports of Nimes, Montpellier and Beziers and are well connected by the French autoroutes and the TGV. There is also a wealth of things to do and see on your doorstep.

There are 5 luxury French gites with pools at Domaine de Monteils.

In a Mediterranean park of 5 hectares, Domaine de Monteils looks like a little Provençal hamlet and provides and oasis of calm and relaxation. These carefully restored luxury gites provide sumptuous accommodation for couples without children. Guests are encouraged to use the spas, the large swimming pool and to enjoy the surrounding nature.

All of these French luxury gites have been equipped to the highest standards with queen sized beds, wifi, satellite HD TVs and high spec kitchens and bathrooms. At Domaine de Monteils, we offer 5 luxury gites, with secluded terraces and private outside jacuzzis. Each of the gites was created by an architect in an outstanding design style.

The maximum capacity for each vacation rental is 2 people - perfect for romance and will provide you with a place of peace, quiet and serenity for your vacation or honeymoon.

Le Violette is a charming 60 sqm ancient stone house, renovated by an architect and furnished in a luxury design style.

There is a large wooden terrace with individual spa, that offers a nice view of the vineyards, and extends to a 400 sqm raised private garden. The 5 hectares of garden provides plenty of space and seclusion. There is a large swimming pool, with surrounding deck area. 2 mountain bikes are also provided for your personal use.

Last visited March 2021. La Violette is a luxury gite with pool located in between Nimes and Montpellier, close to the small medieval town of Sommieres. The surrounding area is famous for its wine and is bordered by the Cevennes hills, the Camargue and the sandy beaches of Languedoc. The area is full of historic sites, including the city of Avignon, the medieval duchy of Uzes, the roman towns of Nimes and Arles and the UNESCO World Heritage sites of Carcassonne and the Pont du Gard.

The Domaine de Monteils was originally a priory, founded in the 9th century, by the monks of Cluny. In this time the monks cultivated yellow saffron, which was rare in the South of France, and we still find a few saffron flowers in the Park. The surrounding vineyards were planted in 18th century. The Domain then became a wine estate. Today we make use of the wine storehouse and its old presses, a former forge and reconverted stables. Close to Domaine de Monteils luxury gites, France, there are many popular places to visit:

Avignon: This city was residence of the pope in the 14th century. Many monuments remain from this period including the Pope`s Palace, the famous "Pont St Bénézet", la "place de l`Horloge" and its theatres. . .

There is a TGV train station in both Nimes and Montpellier, with regular services to Paris and Lille Eurostar. Alternatively, the Eurostar service from London St Pancras to Avignon takes 5 hours 24 mins. A taxi journey takes approximately 35 mins from Montpellier and Nimes and around 50 mins from Avignon.

To reach these luxury vacation rentals at Domaine de Monteils, Southern France, you can fly to:

You can reach these luxury vacation rentals at Domaine de Monteils, by taking the A9 autoroute to in between Montpellier and Nimes. Exit the A9 at junction 26 and follow the D142 and then D12 towards Sommieres. Drive through Sommieres and follow the D35 in the direction of Anduze and Quissac. You will find Domaine de Monteils close to the villages of Carnas, Saint-Clement and Gailhan.

The booking terms for these Luxury vacation rentals in Southern France (sleeps 2) are as follows:

25% deposit at time of booking, balance paid 8 weeks prior to arrival.